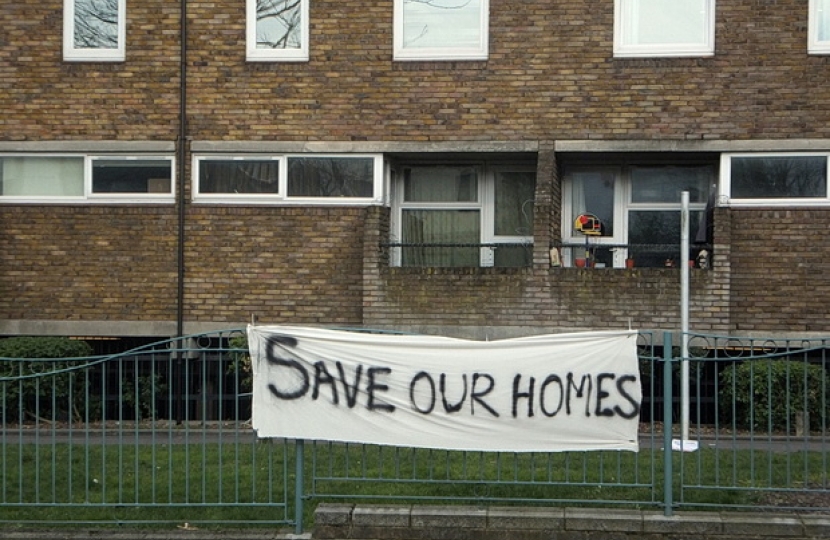 Labour Lambeth faced down a barrage of opposition to force through its decision to destroy Cressingham Garden for a second time and replace it against residents wishes. The official response of Cllr Tim Briggs, Conservative Group Leader and Councillor for Clapham Common Ward outlines his dismay at the inhuman consultation and poorly argued report

In a packed meeting in Lillian Bayliss Technology School last night, Cllr Lib Peck and other cabinet members attempted to defend their decision to destroy the homes of many residents on the estate.  Fighting a tide of angry yet eloquent arguments in favour of repair, rather than destruction of Cressingham Gardens, the council stood by its decision for a second time.   It has had to fund another consultation after a High Court ruling earlier this year found the first consultation ‘unlawful’.

Residents have questioned the financial report – calling for a full inquiry into the Lambeth financial model. It would appear that vast tracts of The People’s Plan, a resident-led plan to repair the estate, had been omitted from the Cabinet report on the issue, including the High Court Ruling, which residents argue was deliberately misleading for both Cabinet Members and residents.

Here follows the Conservative Group response, delivered last night by Cllr Tim Briggs, which argues that the report was flawed and poorly argued and that the second consultation, as with the first, was inhuman and inadequate. He concludes by saying that the Labour council truly is the worst rogue landlord in Lambeth.

“I think its important that the Opposition comments on this report. Our complaint again is mostly the inhuman consultation. The tone of the report is defensive, and the content is poorly argued.

Certainly the UK needs more housing, but saying at Para 1.3 that the 21,000 people on the housing register are a reason or a context for demolishing Cressingham Gardens, when there are only 6,000 people actively bidding to be rehoused, is just spin. Even if there were 50,000 people on the housing register it would not be a reason to demolish people’s homes, especially when demolishing those homes was not in your manifesto.

At Para 1.11 the report says that because this failed consultation has gone on for so long, ‘many residents have disengaged’, and [at para 1.32] that ‘others told officers … they had been inundated and did not wish to receive any more information.’

Because the implication throughout this report is that there is some hard core of residents called the ‘Save Cressingham Gardens Group’ who are stopping the Labour council from helping them by destroying their homes.

So why is it appropriate to say [at para 1.40] that the Save Cressingham Gardens Group are making a ‘claim’ that 86% of residents wanted refurbishment and only 4% wanted demolition? A High Court judge found as a finding of fact that Lambeth’s consultation was inadequate. It would be hard for another set of data to have less authority than Lambeth’s. Where is your sense of context?

Are all 59 of the 63 Labour councillors ready to say that the Save Cressingham Gardens Group are misleading people, that they are liars?

I am finishing my 3 minutes now.

The report tells us at Para 3.2 that money from government in the form of the Decent Homes Programme is now ‘severely limited’. Lambeth has had £100m given to it by central government for 2012-16, that is the largest amount of money given to any local authority in the country as part of the UK-wide Decent Homes Programme. At the last count in Lambeth there were 9,000 council homes unfit to live in. Wandsworth upgraded all its social housing years ago.

Your poor contract management means that huge savings from the £582m that we spend annually on sub-contractors are missed.

We have found that Lambeth also has subcontractors for capital works who quote you twice the going rate for work that needs doing and you are contractually bound to use those subcontractors to do the work. That’s why Lambeth has no money left to refurbish.

Because the basic argument in this report at Para 2.11 is that the Council can’t afford to renovate Cressingham Gardens because repairs have not been done for many years.

Who is in charge of repairs? You are. We know from the last audit that 40% of housing repairs are still not done correctly the first time round. In the case of Cressingham Gardens, your poor management has meant that you failed to repair for many years and are using that poor state of repair, a situation that you created, to justify the demolition of people’s homes.

The Labour council truly is the worst rogue landlord in Lambeth."