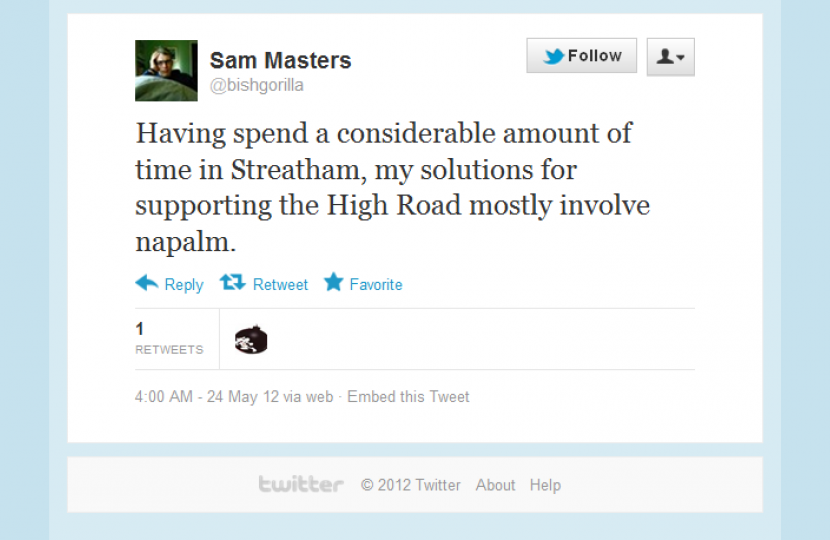 The council spinner, who is meant to help the profile of all areas in the Borough caused outrage when he suggested napalm as a solution for supporting our High Road.

Sadly, this is a public display of the contempt the council has for Streatham, which has long been clear in the way they have neglected the area.

Labour Lambeth takes a dismissive approach to Streatham, but they should be wary of killing the goose that lays their golden egg. While they do the area down, Streatham coughs up more than its fair share of council tax to fund Steve Reed’s vanity projects. Streatham deserves better.

Labour Lambeth's derisory attitude to Streatham is in danger of badly damaging the local economy, particularly our High Road – which depends on visitors and passing trade. Enough is enough with the Streatham-bashing.

Either Cllr Steve Reed agrees with his press officer or he has lost control of his own council’s employees.

Welcome to the St Leonards micro site. In this section you can find out about our ward action team and see the latest campaign news for St Leonards.

Welcome to the Streatham South micro site. In this section you can find out about our ward action team and see the latest campaign news for Streatham South.

Welcome to the Streatham Wells micro site. In this section you can find out about our ward action team and see the latest campaign news for Streatham Wells.